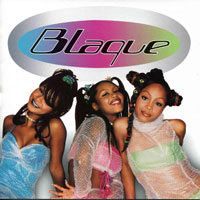 Blaque is an American girl group that had a string of hits in the late 1990s. The group's name stands for Believing, Life, Achieving, Quest, Unity, Everything. Their debut album sold more than 1.5 million copies and was certified Platinum. The group's debut included the gold selling single “808”, the international hit “Bring It All to Me”, and a third single, “I Do”.

Their self-titled debut debuted at number 23 on Billboard's Top R&B/Hip-Hop albums chart, and at number 53 on the official Billboard 200 and was certified platinum by RIAA. The second album called Blaque Out, which was set for release in 2001, went unreleased as the group was dropped from Columbia Records.

After Lopes's death in a car crash in Honduras on April 25, 2002, they signed with Elektra Records and after Reed gave birth to her son Tren Brown, they began work on their third album. Their third album Torch was scheduled to be released exclusively to iTunes in 2008, nearly 5 years after its completion by Music World Entertainment, but was later canceled for a second time.

Tragically, in the midst of creating the new album, on October 26, 2012, Reed died two days before her 33rd birthday after being hit by a car near Atlanta, Georgia.